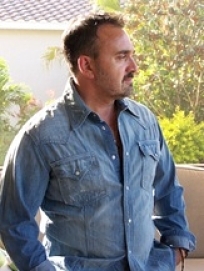 What is your book about?

The book features Jack Canon, a charismatic senator from Kentucky, in his “All-In” run for the White House. He meets a lot of obstacles along his way, from corrupt politicians to relationship troubles to murder conspiracies. But, Jack will stop at nothing to become president, and to get the chance to change the world and make it a better place. Even if that puts his own life at risk. The ending will have you pulling the covers and drawing the shades.  You’ll wonder if it’s even legal to read.

Tell us about yourself.

I’m originally from the Portland, Maine area, lived, and worked there for years before moving to Southwest Florida. My Dad and Mom were artists, my father painted and his mother wrote poetry and loved to garden. Most Saturdays our family loaded up the 1970 Chevy Impala to trek to a one-man show somewhere or other. I took a different track graduating with a business degree, owning and operating an Award Winning Franchise Fitness Center. Currently a professional manager I’m living in Florida with My beautiful wife and children, and following my passion. I have a deep faith. I believe God helps us in all things.

How long did it take you to write the book?

It took me six months from start to finish to write the first draft of Jack Canon’s American Destiny.

What are you working on now? What are some of your other projects?

I’m currently working on the sequel to Jack Canon’s American Destiny – which will be titled Jack Canon – Clean Sweep. The sequel will be available in about three months. Some of my other projects include a children’s book called Sammy the Sea Turtle – about an infant sea turtle taken from his nest the night he was to find his way to the sea. Sammy lives with the family until their son – the boy who took him, graduates from high school. On that day Sammy, backpack in tow – begins the long journey home. My second project, in the works, involves angels – a man during a visit to Bar Harbor Maine encounters an angel; quite accidentally, he is told – she was not supposed to make him aware of her existence. Only three others have ever seen the real thing. Naturally he falls hopelessly in love with the beautiful creature.

Name a few of your favorite authors and why.

Quality Reads UK Book Club Disclosure: Author interview / guest post has been submitted by the author and previously used on other sites.