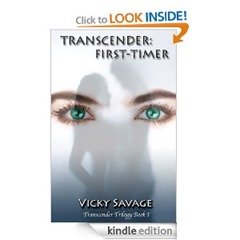 When a freak lightning storm turns terrifying, seventeen-year-old Jaden Beckett leaps for her life only to be glitched into an alternate universe. The destiny police want her out. Jaden's got other plans.
Ripped away from her quiet Connecticut life and dumped into a post-apocalyptic version of earth, Jaden lands smack in the middle of a kidnapping--her own!
Agent Ralston of the Inter-Universal Guidance Agency (IUGA) rescues her and helps her to assume a new identity. And what an amazing identity it is ...
In this world, she's Princess Jaden a member of the royal family of one of the three surviving nations. Plus, her mother's alive here--a miracle she never dreamed possible. If that weren't enough, she finds herself falling hard for Ryder Blackthorn, the half-Cherokee half-Irish outlaw who kidnapped her in the first place.
So, when IUGA finally gets its act together and is ready to send her home, Jaden's not budging. She's pretty sure Agent Ralston's been lying to her, and this whole thing isn't really a cosmic accident after all.
Can the powerful IUGA force her to leave? Or is Jaden what some in this strange land believe her to be--a Transcender with the ability to travel among alternate dimensions at will?