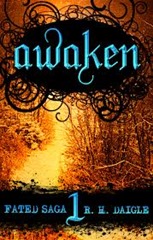 Free until 12 July 2013
Book One in the Fated Saga, A Contemporary Young Adult + Fantasy Series, fueled by Action, Adventure and the Eternal Desire for Truth...
While summering in a New England campground, mind reading thirteen-year-old twins, Meghan and Colin Jacoby, discover they have until the rising of the Blue Moon to help save the life of a young man, whose caravan is forced to flee through a magical portal to another world, without him.
In the process, they have a dark awakening when their own simple, normal world, begins to collide with the complexities of the magical world. The twins face unimaginable dangers, which thrust them into an unexpected choice: to live as they always have or to learn the truth about their past and enter a world that is equally thrilling and terrifying.
More importantly, however, is whether they even have a choice, or will destiny not only force this new magical reality upon them, but require them to sacrifice everyone they love in doing so?
Fated Saga Book List:
Book One, Awaken
Book Two, Shifting
Book Three, Embrace
Book Four, Broken
Book Five TBA
Book Six TBA