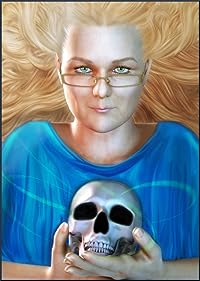 Location and life experiences can really influence writing, tell us where you grew up and where you now live?
I grew up in rural southern Germany, near Lake Constance, the Black Forest, the Hegau Mountains and the Swiss border. I’ve travelled a lot and lived and worked in many countries – including China, Nepal and Mongolia  – and the experience of these landscapes and cultures has definitely influenced my writing. The story Turkish Night, for example, is inspired by bellydancing in Bodrum, while Black Karma is set in Nepal.
Now I live on the south coast of England, in a dilapidated town of former Victorian grandeur, near roaring waves clashing against chalk cliffs, cemeteries clustering around ancient churches, and medieval castle ruins washed by rain. All these places feed my imagination, and you will recognise some of them in Thirty Scary Tales.
Where do you get your inspiration from?
Most of my horror story ideas come from my own fears – things that frighten me, places that creep me out, nightmares that keep me awake at night. Thousands of ideas flutter around in my head at the same time. Sometimes, two or three of those ideas click together like jigsaw pieces, and that’s when a story starts to form. The location is almost always one of the first pieces to click. I like to set my stories in unusual, atmospheric places.
The stories in Thirty Scary Tales are definitely inspired by places where I’ve lived and travelled – the streets of Nepal, the cliffs on the English coast, the stone circles of Cornwall…
Do you plan to publish more books?
I’ve had about fifty books published (under several pen names, in several genres, by several publishers, in several languages) and I’m definitely not going to stop now!
I’m already at work on several new titles: Writing Dark Stories for my bestselling series of writing craft books, an anthology of dragon fantasy stories, a collection of steampunk stories, another collection of horror stories, a sequel to my bestselling dark epic fantasy novel Storm Dancer, and more.
What other jobs have you had in your life?
While I’ve been writing professionally for over thirty years, I’ve also always done other jobs at the same time: teaching adult education, journalism, magazine editing, consulting… even weird things like belly dancing and tarot reading. I was  a museum guide,  development aid worker, a trade fair hostess, a bilingual secretary and an apple picker.
Sometimes the writing has been my main job, sometimes a sideline, but I’ve always written, and I’ve always done something else. I need the variety.
The great thing about these jobs is that they feed my fiction.  In the Thirty Scary Tales collection, the story Turkish Night is about belly dancing, and The Painted Staircase is about a guided museum tour, and they ooze authenticity.
If you could study any subject at university what would you pick?
Hmm – if there’s a programme combining archaeology, ancient history, mythology and literature?

Thirty creepy, atmospheric stories by Rayne Hall.
The horror in these stories is spooky, creepy, unsettling and sometimes disturbing. It is not very violent or gory; however, the stories may not be suitable for young readers without parental guidance. PG 13.
This book is a compilation of volumes 1-5 of the Six Scary Tales books. It includes the acclaimed stories Burning and The Bridge Chamber.
All stories have been previously published in magazines, ezines, collections and anthologies. British English.
Stories in collection include:
The Devil You Know, Greywalker, Prophetess, Each Stone A Life, By Your Own Free Will, The Bridge Chamber, Only A Fool, Four Bony Hands, The Black Boar, Double Rainbows, Druid Stones, Burning, Scruples, Seagulls, Night Train, Through the Tunnel, Black Karma, Take Me To St. Roch’s, Turkish Night, Never Leave Me, The Colour of Dishonour, Beltane, The Painted Staircase, I Dived The Pandora, Terre Vert and Payne’s Grey, They Say, Tuppence Special, Disturbed Sleep, Normal Considering the Weather, Arete.
Buy Now @ Amazon & Smashwords
Genre – Horror
Rating – PG-13
More details about the author and the book

Connect with Rayne Hall on Twitter
Quality Reads UK Book Club Disclosure: Author interview / guest post has been submitted by the author and previously used on other sites.