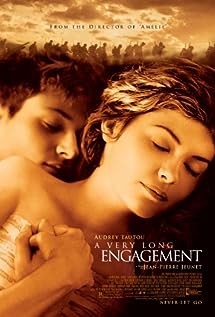 Near the end of World War I in France, five nearly hopeless men shoot themselves in order to escape the horror of the frontline trenches at the Somme.

Five desperate French soldiers during The Battle of the Somme shoot themselves, either by accident or with purpose, in order to be invalided back home. Having been "caught" a court-martial convenes and determines punishment to be banishment to No Man's Land with the objective of having the Germans finish them off. In the process of telling this tale each man's life is briefly explored along with their next of kin as Methilde, fiancée to one of the men, tries to determine the circumstances of her lover's death. This task is not made any easier for her due to a bout with polio as a child. Along the way she discovers the heights and depths of the human soul. Written by Liam McBain

This film is inspiring, to follow what you believe and find your loved ones! A very moving film but very true to life! A story of five soldiers being summoned to No Mans Land and left to die. The film shows how these soldiers fought for their lives and how one particular solider, Manech, and his soon to be wife, played by Audrey Tautou, uncovers the truth to find out about his whereabouts. Written by Gem

Five desperate men shoot themselves in order to be relieved from the horrifying frontline at the Somme, in WWI. A court-martial decides to punish them by leaving them alone in no-man's land, to be killed in the crossfire. Then all hell breaks loose and they all die. Or not? One of these men's fiancée, a young girl who can't walk since age 3, receives information that makes her suspect his boyfriend might have gotten away alive. So she embarks in a painful, long and often frustrating ordeal to find out the truth. Written by Erwin van Moll <max404@hotmail.com>

The film is set in France near the end of World War I in the deadly trenches of the Somme, in the gilded Parisian halls of power, and in the modest home of an indomitable provincial girl. It tells the story of this young woman's relentless, moving and sometimes comic search for her fiancé, who has disappeared. He is one of five French soldiers believed to have been court-martialed under mysterious circumstances and pushed out of an allied trench into an almost-certain death in no-man's land. What follows is an investigation into the arbitrary nature of secrecy, the absurdity of war, and the enduring passion, intuition and tenacity of the human heart. Written by bondish