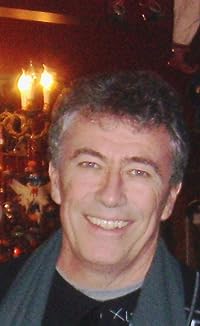 What other jobs have you had in your life?

What I wanted to do was play for Manchester United but they didn’t want to play with me. I had trails with a top flight English club – Southampton – and didn’t make it. I drove taxis while I was learning to write. I worked for 13 years as a volunteer paramedic in Australia. Working as a volunteer paramedic is a book on its own! I would be sitting at my desk typing then my pager would go off and half an hour later I’d be crawling into a car wreck feeling for a pulse. It was an unusual life.

If you could live anywhere in the world where would it be?

Right where I’m living now – Barcelona. The people are great, there are tapas bars everywhere, you can get a beer any hour of the day or night, and you can feel history in every stone.

Tell us about your family?

I have two amazing daughters, they both live in London now. One is a director of a company that manages pubs in the centre of London, the other is studying writing and literature at Goldsmith. Pubs and writing! They’re not really chips off the old block, they’re half a block each! I am very close to my brother and his wife, they always have a bed and a bottle of whisky for me whenever I get in a jam. Which is far too often. My niece is probably my biggest fan – she goes up to complete strangers while they’re reading a book on a train and asks them if the book’s one of mine. When they say no, she says – well, why not? and tells them to start with Venom.

No pasa nada. I write anywhere, any place, any time. Cut a vein and scrawl on the back of a MacDonald’s towelette if there’s nothing else handy. I have to write. It’s an addiction. Every Thursday I go to Writers Anonymous but I keep falling off the wagon.

Tell us about your new book? What’s it about and why did you write it?

What do you do if you are a 12 year old girl and are married off to a king who prefers men? The answer, if your name is Isabella, is you wait until you are old enough and then you invade England with your lover and depose him, and put your son on the throne.

I was fascinated with this story because growing up in England our school teachers told us England was only ever invaded once, by William the Conqueror in 1066. They never mentioned Isabella! Was it just blatant sexism? Anyway, I just found the whole story fascinating with a lot of relevance for sexual issues today. And great characters – really conflicted.

She was taught to obey. Now she has learned to rebel.

12 year old Isabella, a French princess marries the King of England – only to discover he has a terrible secret. Ten long years later she is in utter despair – does she submit to a lifetime of solitude and a spiritual death – or seize her destiny and take the throne of England for herself?

Isabella is just twelve years old when she marries Edward II of England. For the young princess it is love at first sight – but Edward has a terrible secret that threatens to tear their marriage – and England apart.

Who is Piers Gaveston – and why is his presence in the king’s court about to plunge England into civil war?

The young queen believes in the love songs of the troubadours and her own exalted destiny – but she finds reality very different. As she grows to a woman in the deadly maelstrom of Edward’s court, she must decide between her husband, her children, even her life – and one breath-taking gamble that will change the course of history.

This is the story of Isabella, the only woman ever to invade England – and win.

In the tradition of Philippa Gregory and Elizabeth Chadwick, ISABELLA is thoroughly researched and fast paced, the little known story of the one invasion the English never talk about.